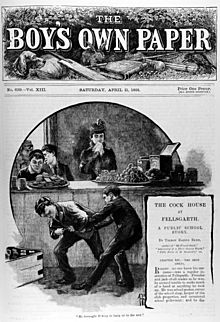 Magazines intended for boys fall into one of three classifications. These are comics which tell the story by means of strip cartoons; story papers which have several short stories; and pulp magazines which have a single, but complete, novella in them. The latter were not for the younger child and were often detective or western in content and were generally greater in cost. Several titles were published monthly whereas the other two categories were more frequent.

All content from Kiddle encyclopedia articles (including the article images and facts) can be freely used under Attribution-ShareAlike license, unless stated otherwise. Cite this article:
British boys' magazines Facts for Kids. Kiddle Encyclopedia.