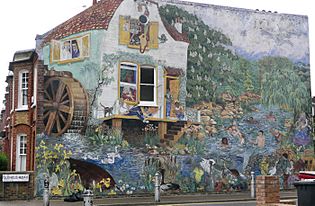 The Brixton murals are a series of murals by local artists in the Brixton area, in London. Most of the murals were funded by Lambeth London Borough Council and the Greater London Council after the Brixton riots in 1981.

The murals portray politics, community and ideas. Many are now in a state of disrepair and some are no longer there.

The remaining murals are within walking distance of each other.

The murals listed above can still be seen, but some murals are no longer there.

These murals can still be seen in Brixton.

All content from Kiddle encyclopedia articles (including the article images and facts) can be freely used under Attribution-ShareAlike license, unless stated otherwise. Cite this article:
Brixton murals Facts for Kids. Kiddle Encyclopedia.