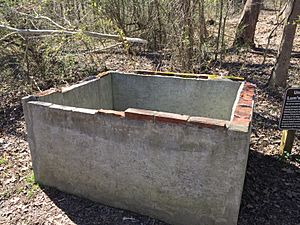 This park measures up to 12 acres of woodland and is located south of Morgan Memorial Park. The parking lot and the trail head is located at the intersection of Pritchett Drive and Chatham Lane.

As visitors begin the half mile through the park grounds, they observe that a chainsaw sculptured bear marks the trail head.

The trail contains a small man-made brook, three footbridges, and a meadow. The man-made brook introduces a new water feature for the local wildlife. The park contains picnic tables, benches, and signs depicting the species of native bushes and trees.

This well can be found in the park at the end of a trail, overlooking the parking lot. "This well was named in honor of African American Christopher Columbus Martin... reportedly the longest living citizen of Muhlenberg County. He was born into slavery in 1844 and he died in 1956 at the ripe old age 112. Among the many places he lived in the county this area was one of them. He endeared himself to everyone with his fiddle and folk songs" (Brizendine Bro.s Nature Park sign).

The species of trees that can be found in the park are the typical native trees found in Western Kentucky. Each individual tree has an individual plaque to indicate the species of flora. For example one plaque could have a typical tree found in Western, Ky. These species include Red Maple, River Birch, Hickory, Redbud, Yellowwood, Flowering Dogwood, American Beech, American Holly, Eastern Red Cedar, Sweetgum, Tulip Tree, Tulip Poplar, Blackgum, American Hophornbeam, Oak, and Carolina Buckthorn.

Brizendine Brothers Nature Park was Rated #2 in trip advisor of things to do in Greenville.

All content from Kiddle encyclopedia articles (including the article images and facts) can be freely used under Attribution-ShareAlike license, unless stated otherwise. Cite this article:
Brizendine Brothers Nature Park Facts for Kids. Kiddle Encyclopedia.