Kids Encyclopedia Facts
Not to be confused with the similarly-named cities of Greenup and Greensburg, Kentucky. The city of Manchester, Kentucky, was also founded as 'Greenville'.

Greenville is a home rule-class city in Muhlenberg County, Kentucky, in the United States. It is the seat of its county. The population was 4,312 at the 2010 census.

The town was settled in 1799 on an estate donated by local landowner William Campbell in order to establish a seat of government for a new county. Greenville was not established by the state assembly until 1812, however. It was incorporated as a city in 1848.

The city was probably named for the Revolutionary War general Nathanael Greene. Local lore holds it was named by Campbell's wife after the abundant forests seen from the town's hilltop location.

The Muhlenberg County Veterans Mall and Plaza was originally constructed in the mid 1980s as the "Muhlenberg County War Memorial" to honor veterans who fought in World War I, World War II, the Korean War and the Vietnam War. The construction of the current plaza began in the mid 2000s as a part of the Muhlenberg County Courthouse renovations. New additions to the memorial include the Lt. Ephraim McLean Brank Memorial, located at the entrance of the plaza and the Historic Gristmill Stone which is a tribute to the song "Paradise" by John Prine. 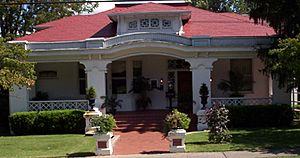 Thistle Cottage, formerly the Duncan Cultural Center, occupies the former home of William Graham Duncan on Cherry Street in Greenville. Constructed in 1912, the home was donated to the city of Greenville by Hamilton Richardson Duncan, Sr., the last of the Duncan family to reside there, in 1986. It became the Duncan Cultural Center a year later but did not open to the public until 1989. The house became a part of Muhlenberg County Public Libraries in 2013, at which time the name reverted to Thistle Cottage, as the home was originally christened by builder William G. Duncan.

Today, the Center displays a number of artifacts related to the history and culture of Muhlenberg County, including a coal museum. It is also available for rent to host parties and other special events.

The Muhlenberg County Rail Trail is a paved trail following an old Paducah and Louisville railway route between Central City, Kentucky and Greenville that is open to pedestrian and non-motorized vehicle traffic. Kentucky's most extensive rail trail conversion to date, the Muhlenberg Rail Trail opened October 20, 2000 and was named "Trail of the Month" by the Rails to Trails Conservancy in May 2004. A viewing platform and birding guide are available where the trail passes through a local wetland. The Muhlenberg County Rails to Trails Committee has railbanked an additional 3 miles (4.8 km) of abandoned rail, possibly for a later extension into McLean County.

The 1987 Encyclopedia of Kentucky refers to Greenville as "the unofficial capital of the Black Belt", a reference to the area's production of coal and dark tobacco.

Greenville has a lending library, a branch of the Muhlenberg County Public Library. Schools located in town include Greenville Elementary School and Muhlenberg South Middle School.

All content from Kiddle encyclopedia articles (including the article images and facts) can be freely used under Attribution-ShareAlike license, unless stated otherwise. Cite this article:
Greenville, Kentucky Facts for Kids. Kiddle Encyclopedia.