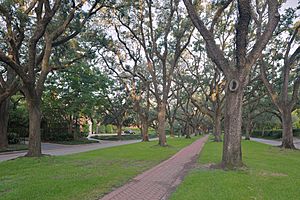 View of the Broadacres Historic District (Houston, Texas, USA), looking west-southwest from the median esplanade across from the 1314 street address.

Broadacres is a subdivision in Houston, Texas within the Boulevard Oaks community. It is located north of Bissonnet Street, south of U.S. Route 59, west of the Houston Museum District, and east of other subdivisions of Boulevard Oaks. The neighborhood is known for its large lots, historic preservationism, broad tree canopies, wide streets with medians, and affluence. 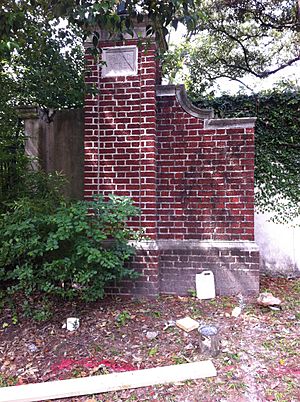 James A. Baker Jr., a lawyer who was the father of James A. Baker III, established the Broadacres community. Baker had purchased a parcel of property north of the Rice Institute in 1908. In 1922 he discussed the possibility of developing that parcel with his son. Seventeen investors agreed to purchase the lots, larger than average in Houston, by late 1922. Kate Sayen Kirkland, author of James A. Baker of Houston, 1857-1941, said that "The Bakers conceived their Broadacres enclave as a public amenity distinguished by fine architecture and distinctive planning but limited in ownership to personal and professional friends invited to invest in the project." William Ward Watkin created the layout of the area. Watkin, Birdsall P. Briscoe, and John Staub had served as architects of several of the houses. The families who had houses built in Broadacres were not singular architectural patrons.

During the Great Depression construction in Broadacres ceased. James A. Baker Jr. never lived in Broadacres, because he believed he would be unable to afford a $20,000 (about $243123.81 in today's money) down payment for a lot. Fox said that by the 1930s Stephen Fox, author of The Country Houses of John F. Staub, said that by the 1930 Broadacres "collectively displayed its residents as a Houston upper class."

Anne Schlumberger Bohnn wrote a book about the history of Broadacres.

In 2000 the Greater Houston Preservation Alliance offered a walking tour of the community. 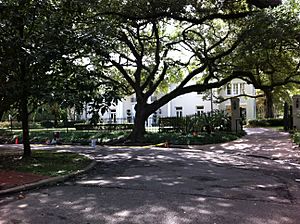 Broadacres is in proximity to Rice University.

Kate Sayen Kirkland, author of James A. Baker of Houston, 1857-1941, said "Typical of the finest homes being constructed in Houston during the 1920s, the houses in Broadacres represent the eclectic style favored by the country house movement prevalent in that era." Stephen Fox, author of The Country Houses of John F. Staub, said that in the 1920s "the entire neighborhood of Broadacres attained a collective identity that emphasized—through the beauty and decorum of individual houses and their systematic integration into a hierarchical landscape order that moved rhythmically measured sequences from the space of each country house, to its garden, to the space of the community, to the space of the planned garden city— the discernment, authority and what [Richard L. Bushman, a cultural historian] called "radiance" of its residents." Fox said that "[i]t is the extraordinary collective impact that Broadacres's landscape still exerts that makes it such an instructive example of how elite community was socially constructed in Houston through architecture and landscape architecture during the 1920s."

All content from Kiddle encyclopedia articles (including the article images and facts) can be freely used under Attribution-ShareAlike license, unless stated otherwise. Cite this article:
Broadacres, Houston Facts for Kids. Kiddle Encyclopedia.