Brodie Castle is a well-preserved Z plan castle located about 3 1⁄2 miles (5.5 kilometres) west of Forres, in Moray, Scotland. The castle is a Category A listed building and the grounds are included in the Inventory of Gardens and Designed Landscapes in Scotland.

The original Z-plan castle was built in 1567 by Clan Brodie but was destroyed by fire in 1645 by Lewis Gordon of Clan Gordon, the 3rd Marquis of Huntly. In 1824, architect William Burn was commissioned to convert it into a large mansion house in the Scots Baronial style, but these additions were never completed and were later remodelled by James Wylson (c. 1845).

The Brodie family called the castle home until the early 21st century. It is widely accepted that the Brodies have been associated with the land on which the castle is built since around 1160, when it is believed that King Malcolm IV gave the land to the family.

Ninian Brodie of Brodie (The Brodie of Brodie), the castle's last resident member of the family, died in 2003. The former family wing is being prepared for holiday letting. 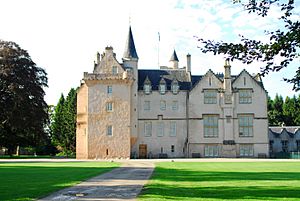 Today the castle and surrounding policies, including a national daffodil collection, are owned by the National Trust for Scotland and are open to the public to visit throughout the year. The castle may be hired for weddings and indoor or outdoor events. An ancient Pictish monument known as Rodney's Stone can be seen in the castle grounds.

All content from Kiddle encyclopedia articles (including the article images and facts) can be freely used under Attribution-ShareAlike license, unless stated otherwise. Cite this article:
Brodie Castle Facts for Kids. Kiddle Encyclopedia.