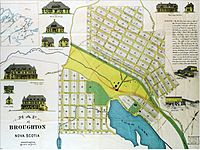 Broughton (2001 pop.: 24) was a former town in the Cape Breton Regional Municipality about 12 miles from the former city of Sydney, Nova Scotia. Expected to be a boomtown when first settled, it was mostly abandoned when mining operations failed. During the First World War, Broughton was used by the 185th Cape Breton Highlanders as training ground. During this time the famous Broughton Arms Hotel burned to the ground in April 1916. The Hotel is believed to have had North America's first revolving door.

Broughton was first settled at the turn of the 20th century as a mining town for the Cape Breton Coal, Iron & Railway Company, started by British mining engineer Thomas Lancaster and British businessman Col. Horace Mayhew which intended to develop the coal seam at Cochrane's Lake (aka: Loon Lake). The pair raised millions of dollars, mostly from English investors, and construction on the town was started, with streets laid out and a number of large official buildings constructed, including the Office Building, the Assistant Manager's House, the Broughton Arms Hotel and Crown Hotel. Remains of these substantial buildings can still be seen today, the scale of which giving an impression of the town's lofty ambitions. A railway was built connecting to the Sydney & Louisburg Railway at False Bay Head, continuing through Broughton Junction to Broughton, a distance of 4 ½ miles, construction beginning in 1905 and completed in 1906. Seemingly too much money and effort was spent on the details and modern conveniences of the "most up-to-date modern city", one of the first attempts at a planned community in Canada, and not enough attention to the actual mine operation. The company went bankrupt in 1907 after it failed to secure rail transportation to get its coal to port. It is said this was due to the opposition of the Dominion Coal Company, which would not allow its Sydney and Louisburg Railway to carry the coal produced by the mine. The British pair left Cape Breton, abandoning the company and the town.

The community remained active until its peak in 1916. The army had taken over the hotels to house officers and men during the First World War. After the end of the war the community declined rapidly. Some residents still live in the area.

A long article, detailing this company's history, appeared in the Montreal Daily Star, 25 May 1907.

All content from Kiddle encyclopedia articles (including the article images and facts) can be freely used under Attribution-ShareAlike license, unless stated otherwise. Cite this article:
Broughton, Nova Scotia Facts for Kids. Kiddle Encyclopedia.