Bruce was the name of a town in Rock County, in the U.S. state of Minnesota. The townsite is now abandoned, and no trace remains. 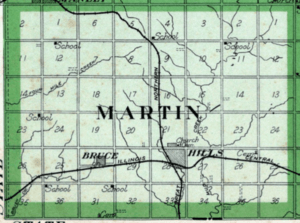 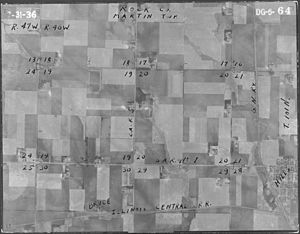 This 1936 ariel USDA photo is the last known photo of Bruce, Minnesota.

Text from Arthur Rose's An Illustrated History of Rock County and Pipestone County, Minnesota, Published in 1911. 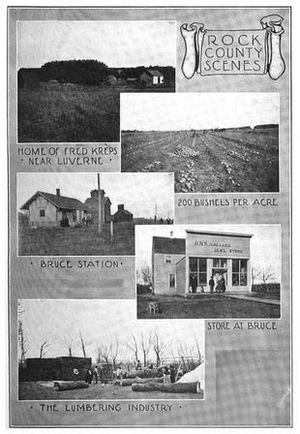 Photos of Bruce, Minnesota, from Arthur Rose's An Illustrated History of Rock County and Pipestone County, Minnesota, Published in 1911.

Bruce was platted in May 1888, and named for a railroad official. The community had a post office from 1888 until 1936. It had a station of the Illinois Central Railroad. Most of its businesses and residences relocated to the town of Hills when the Sioux City and Northern Railroad extended its line from Sioux City, Iowa to Garretson, South Dakota in 1890, bypassing Bruce. The town gradually faded afterwards. The last buildings were removed in the early 1970s and the Illinois Central tracks were removed in 1982.

All content from Kiddle encyclopedia articles (including the article images and facts) can be freely used under Attribution-ShareAlike license, unless stated otherwise. Cite this article:
Bruce, Minnesota Facts for Kids. Kiddle Encyclopedia.