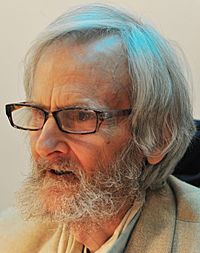 Bruce Bickford (February 11, 1947 – April 28, 2019) was an American animator. He worked notably in clay animation. He is best known for his work with musician and filmmaker Frank Zappa. He worked on animating the Zappa videos Baby Snakes (1979), The Dub Room Special (1982) and The Amazing Mr. Bickford (1987). He was born in Seattle, Washington.

All content from Kiddle encyclopedia articles (including the article images and facts) can be freely used under Attribution-ShareAlike license, unless stated otherwise. Cite this article:
Bruce Bickford (animator) Facts for Kids. Kiddle Encyclopedia.