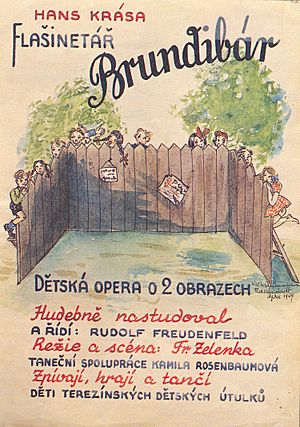 Poster for a performance of Brundibár, Theresienstadt, 1944.

Brundibár is a children's opera by Jewish Czech composer Hans Krása with a libretto by Adolf Hoffmeister, made most famous by performances by the children of Theresienstadt concentration camp (Terezín) in occupied Czechoslovakia. The name comes from a Czech colloquialism for a bumblebee.

The plot of the opera shares elements with fairytales such as Hansel and Gretel and The Town Musicians of Bremen. Aninka [in English Annette] and Pepíček (Little Joe) are a fatherless sister and brother. Their mother is ill, and the doctor tells them she needs milk to recover. But they have no money. They decide to sing in the marketplace to raise the needed money. But the evil organ grinder Brundibár (of this figure Iván Fischer has said, "Everyone knew he represented Hitler") chases them away. However, with the help of a fearless sparrow, keen cat, and wise dog, and the children of the town, they are able to chase Brundibár away, and sing in the market square.

The opera contains obvious symbolism in the triumph of the helpless and needy children over the tyrannical organ grinder, but has no overt references to the conditions under which it was written and performed. However, certain phrases were to the audience clearly anti-Nazi. Though Hoffmeister wrote the libretto before Hitler's invasion, at least one line was changed by poet Emil Saudek at Terezin, to emphasize the anti-Nazi message. "While the original said,'He who loves so much his mother and father and his native land is our friend and he can play with us,' Saudek's version reads: 'He who loves justice and will abide by it, and who is not afraid, is our friend and can play with us.'"(Karas, p. 103).

Mecklenburgh Opera Production: UK 1992. Mecklenburgh Opera brought Brundibar to the UK in 1992. The company's Artistic director John Abulafia created an English performing version. This was staged at London's Queen Elizabeth Hall in a double bill with another Terezin opera, The Emperor of Atlantis by Viktor Ullmann. John Abulafia directed, Anne Manson conducted, the cast was drawn from the New London Children's Choir. This production was filmed by the BBC, the TV director was Simon Broughton: it was shown on VE Day 1995.

Mecklenburgh Opera then revived the production at Stirling Arts Centre in 1995, the Janáček Festival at Hukvaldy in 1996. John Abulafia revived the production in 2002 with the Halle Orchestra. The cast was drawn from schools in Salford and the Halle conducted by Edward Gardner. It was staged as part of the opening celebrations of the Imperial War Museum North.

In 2003, the opera was adapted into a children's picture book by Tony Kushner with illustrations by Maurice Sendak. Sendak emphasized the symbolism of the opera by drawing the character of Brundibár with a Hitler moustache. The book was named one of the New York Times Book Review's 10 Best Illustrated Books of 2003.

The opera was performed in 2003 at Chicago Opera Theater; directed and designed by Sendak, with Tony Kushner's libretto.

In 2005, the book was turned into a full production of the opera, with libretto by Tony Kushner adapted from Hoffmeister's. Sendak and Kris Stone designed the sets and Robin I. Shane designed the costumes for the new production. The opera premiered at the Berkeley Repertory Theatre where it was performed along with another short Czech opera, Comedy on the Bridge, with music by Bohuslav Martinů and libretto by Tony Kushner adapted from Václav Kliment Klicpera. The opera then moved to the New Victory Theater for its Off-Broadway New York premiere, and Comedy on the Bridge was replaced with a new Kushner play, But the Giraffe. But the Giraffe was about a young girl who was faced with the difficult decision of taking her beloved stuffed giraffe or her uncle's Brundibár score. It served as a curtain raiser for Brundibár. In 2005 and 2011, the children's opera was performed at the Victory Theatre in Evansville, Indiana.

In 2006, Brundibár and Comedy on the Bridge were staged by the Yale Repertory Theater in New Haven, CT.

There are at least six CD recordings of Brundibár available:

All content from Kiddle encyclopedia articles (including the article images and facts) can be freely used under Attribution-ShareAlike license, unless stated otherwise. Cite this article:
Brundibár Facts for Kids. Kiddle Encyclopedia.