Berkeley Repertory Theatre is a regional theater company located in Berkeley, California. It runs seven productions each season from its two stages in Downtown Berkeley.

The company was founded in 1968, as the East Bay's first resident professional theatre. Michael Leibert was the founding artistic director, who was then succeeded by Sharon Ott in 1984. The company won the Regional Theatre Tony Award in 1997. The theater added the 600-seat proscenium Roda Theatre next door to its existing 400-seat asymmetrical thrust stage in 2001, as well as opening its Berkeley Rep School of Theatre the same year. Its current Artistic Director is Johanna Pfaelzer, who took on the position in September 2019. Managing Director Susan Medak is a board member and former President of the League of Resident Theatres.

Productions are a mix of classic modern plays such as Henrik Ibsen's Ghosts and Terrence McNally's Master Class, the latter featuring Rita Moreno as opera diva Maria Callas, and significant recent plays with many West Coast premieres such as Moisés Kaufman's The Laramie Project and Tony Kushner's Homebody/Kabul and even world premieres such as Kushner's Hydriotaphia and Charles Mee's Fetes De La Nuit. 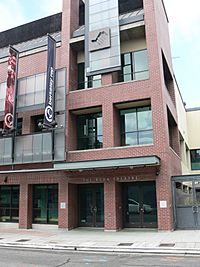 Berkeley Rep bolsters its commitment to new works through The Ground Floor (Berkeley Rep's Center for the Creation and Development of New Work) and year-long Fellowship Program aimed at training the next generation of theatre professionals.

The theatre opened their 2009–10 season with the first stage production of Green Day's 2004 rock opera American Idiot. The hugely popular show was originally scheduled to run from September 4 through October 11, but was extended twice, finally ending on November 15, 2009. The show subsequently opened on Broadway at the St. James Theatre on April 20, 2010.

The musical Ain't Too Proud: The Life and Times of the Temptations, a jukebox musical based on the story of the Motown group The Temptations, started performance at Berkeley Rep August 31, 2018. It was originally scheduled to run through October 8, but was later extended through October 22 and again through November 5. The musical was the highest-grossing production in the theatre's history. The show had runs at other regional theaters before transferring to Broadway, opening at the Imperial Theatre on March 21, 2019.

All content from Kiddle encyclopedia articles (including the article images and facts) can be freely used under Attribution-ShareAlike license, unless stated otherwise. Cite this article:
Berkeley Repertory Theatre Facts for Kids. Kiddle Encyclopedia.