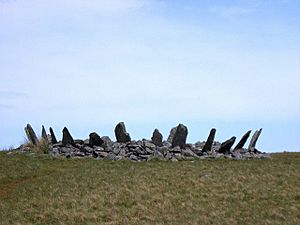 Bryn Cader Faner is a Bronze Age round cairn which lies to the east of the small hamlet of Talsarnau in the Ardudwy area of Gwynedd in Wales. The diameter is 8.7 metres (29 ft) and there are 18 thin jagged pillars which jut upwards from the low cairn. It is thought to date back to the late third millennium BC. The site was disturbed by 19th-century treasure-seekers, who left a hole in the center indicating the position of a cist or a grave. Originally there may have been about 30 pillars, each some 2 metres (7 ft) long. However, before the Second World War, the British army used the site for gunnery practice and damaged many of the stones on the east side.

All content from Kiddle encyclopedia articles (including the article images and facts) can be freely used under Attribution-ShareAlike license, unless stated otherwise. Cite this article:
Bryn Cader Faner Facts for Kids. Kiddle Encyclopedia.