Bubbleworks (originally named Prof. Burp's Bubble Works, then Imperial Leather Bubbleworks from 2006) was a dark water ride opened in 1990 at Chessington World of Adventures Resort in Greater London, England. It took riders through animated scenes of a comical factory producing fizzy pop. The original ride closed, to be redesigned in 2006 with a sponsorship by Imperial Leather toiletries, with the majority of the animations removed. The new Bubbleworks then closed in September 2016 to be replaced by The Gruffalo River Ride Adventure. 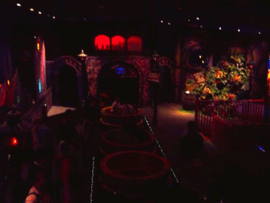 The ride was created as part of the second phase to regenerate Chessington Zoo into a popular theme park. The Transylvania area in Chessington World of Adventures was created in 1990, opening with the Vampire and Prof. Burp's Bubble Works as its main attractions.

The dark ride went on to be highly successful for the park. It spawned similar water dark rides in the country and was named third best dark ride in the world by the National Amusement Park Historical Association. Following the BubbleWorks, Keith Sparks and John Wardley teamed up again to produce The Haunted House at Alton Towers in 1992. John Wardley later reflected on the attraction as being his "proudest moment at Chessington".

The ride also made use of themed merchandising, something which has since become commonplace in UK theme parks. Riders had the option to exit into a gift shop, originally selling BubbleWorks souvenirs including Professor Burp-branded drinks. In later years, the ride's exit path was permanently routed through the gift shop. 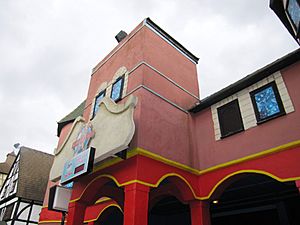 Exterior of the Imperial Leather Bubbleworks, as it appeared following the attraction's redesign in 2006.

Prof. Burp's BubbleWorks operated for fifteen years, before being replaced a new sponsored version by Tussauds Studios at the end of 2005, without the involvement of the ride's original design team. The ride's theme was changed to a soap factory to suit sponsor Imperial Leather. Several of the sets and props were recycled, extensively modified and repainted by Tussauds. Additionally, almost all the animations were removed or made static.

"The Bubble Works, I think probably that was one of the happiest experiences I had. It had, and has still got, a huge following - even though it in effect closed [in 2005]. [...] And it was very sad when the ownership of the park changed that it was decided that the Bubbleworks had to be made more commercial, and a sponsor was brought in, and the storyline was reworked to suit the brand of the sponsor."

Upon re-opening, the redesigned attraction received highly negative response for having removed the animations and humour of the ride and for the flawed alterations to its soundtrack, lighting and animations (including dubbing over most of the original theme music with quacking duck sounds). It was noted that the new Bubbleworks was largely a "monotonous... charmless and, at best, highly irritating" advert for its sponsor.

The original ride's producer John Wardley refused to ride the new version, having been warned that he "would weep if [he] did", emphasising that he disowned the new version.

In 2014 the Imperial Leather brand logos were removed or covered up, although the ride remained unchanged otherwise. On 21 December 2013, a fire broke out at the adjacent Creaky Cafe building, which damaged an exterior wall to the finale room, requiring repairs. During this time the ride's facade was repainted in blue.

In the summer of 2016, Chessington announced that the ride was set to close in September that year to be replaced by a new dark ride. The replacement was developed by Merlin Magic Making (previously Tussauds Studios).

Chessington subsequently announced that a ride based on the Gruffalo franchise would open in 2017; a decision that was met with highly mixed reaction on social media.

Throughout the closing down period, Chessington conflated the much-changed 2006 ride with the 1990 Professor Burp's version (which had received its own closing down event 10 years earlier), and instructed their press coverage to do so. It was erroneously claimed that Prof. Burp's BubbleWorks had been operating for 26 years. The park were criticised for capitalising on the reputation of the since-closed original. John Wardley declined to attend the closing down event in 2016. The Bubbleworks finally closed on 6 September, with many of its remaining props sold at auction.

All content from Kiddle encyclopedia articles (including the article images and facts) can be freely used under Attribution-ShareAlike license, unless stated otherwise. Cite this article:
Bubbleworks Facts for Kids. Kiddle Encyclopedia.