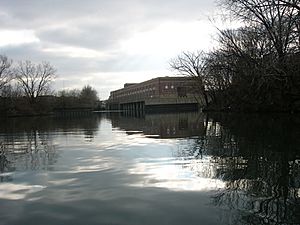 Bubbly Creek is a nickname for the South Fork of the Chicago River's South Branch. It is the border between the Bridgeport and McKinley Park community areas of the city. The nickname for the creek comes from gases that bubbled out of the riverbed due to the decomposition of blood and entrails that were dumped in the river in the early 20th century by local meatpacking businesses that surrounded the Union Stock Yards.

Author Upton Sinclair wrote an exposé called The Jungle, which was an unflattering portrait of the meat packing industry of America. In it, he wrote:

""Bubbly Creek" is an arm of the Chicago River, and forms the southern boundary of the Union Stock Yards; all the drainage of the square mile of packing-houses empties into it, so that it is really a great open sewer a hundred or two feet wide. One long arm of it is blind, and the filth stays there forever and a day. The grease and chemicals that are poured into it undergo all sorts of strange transformations, which are the cause of its name; it is constantly in motion, as if huge fish were feeding in it, or great leviathans disporting themselves in its depths. Bubbles of carbonic gas will rise to the surface and burst, and make rings two or three feet wide. Here and there the grease and filth have caked solid, and the creek looks like a bed of lava; chickens walk about on it, feeding, and many times an unwary stranger has started to stroll across, and vanished temporarily. The packers used to leave the creek that way, till every now and then the surface would catch on fire and burn furiously, and the fire department would have to come and put it out. Once, however, an ingenious stranger came and started to gather this filth in scows, to make lard out of; then the packers took the cue, and got out an injunction to stop him, and afterwards gathered it themselves. The banks of "Bubbly Creek" are plastered thick with hairs, and this also the packers gather and clean."

All content from Kiddle encyclopedia articles (including the article images and facts) can be freely used under Attribution-ShareAlike license, unless stated otherwise. Cite this article:
Bubbly Creek Facts for Kids. Kiddle Encyclopedia.