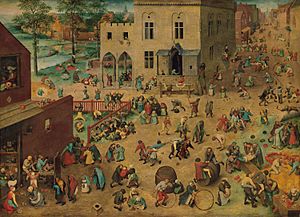 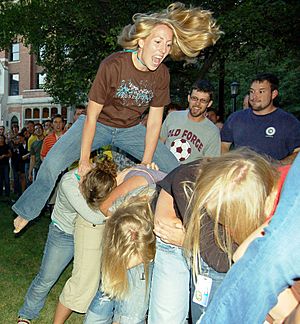 Buck buck (also known as Johnny-on-a-Pony, or Johnny-on-the-Pony) is a children's game with several variants. One version of the game is played when "one player climbs another's back" and the climber guesses "the number of certain objects out of sight". Another version of the game is played with "one group of players [climbing] on the backs of a second group in order to build as large a pile as possible or to cause the supporting players to collapse."

As early as the 16th century, children in Europe and the Near East played Buck, Buck, which had been called "Bucca Bucca quot sunt hic?" Pieter Bruegel's painting Children's Games (1560) depicts children playing a variant of the game.

All content from Kiddle encyclopedia articles (including the article images and facts) can be freely used under Attribution-ShareAlike license, unless stated otherwise. Cite this article:
Buck buck Facts for Kids. Kiddle Encyclopedia.