Phra Dharmakosācārya (Nguam Indapañño) (Thai: พระธรรมโกศาจารย์ (เงื่อม อินฺทปญฺโญ); RTGS: Phra Thammakosachan (Ngueam Inthapanyo)), also known as Buddhadāsa Bhikkhu (Thai: พุทธทาสภิกขุ; RTGS: Phutthathat Phikkhu, May 27, 1906 – May 25, 1993) was a famous and influential Thai ascetic-philosopher of the 20th century. Known as an innovative reinterpreter of Buddhist doctrine and Thai folk beliefs, Buddhadasa fostered a reformation in conventional religious perceptions in his home country, Thailand, as well as abroad. Buddhadasa developed a personal view that those who have penetrated the essential nature of religions consider "all religions to be inwardly the same", while those who have the highest understanding of dhamma feel "there is no religion". 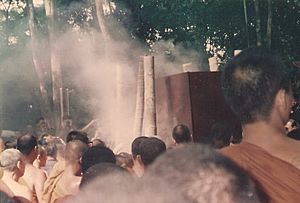 Cremation of Buddhadasa in 1993

Buddhadasa renounced civilian life in 1926. Typical of young monks during the time, he traveled to the capital, Bangkok, for doctrinal training but found the wats there dirty, crowded, and, most troubling to him, the sangha corrupt, "preoccupied with prestige, position, and comfort with little interest in the highest ideals of Buddhism." As a result, he returned to his native rural district and occupied a forest tract near to his village, founding Suan Mokkh in 1932.

In later years, Buddhadasa's teachings attracted many international seekers to his hermitage. He held talks with leading scholars and clergy of various faiths. His aim in these discussions was to probe the similarities at the heart of each of the major world religions. Before his death in 1993, he established an International Dhamma Hermitage Center across the highway from his own retreat to aid in the teaching of Buddhism and other yogic practices to international students. The area of Suan Mokkh was expanded to approximately 120 acres of forest.

However, Buddhadasa was skeptical of his fame; when reflecting on the busloads of visitors to Suan Mokkh he would say, "sometimes I think many of these people just stop here because they have to visit the bathroom." 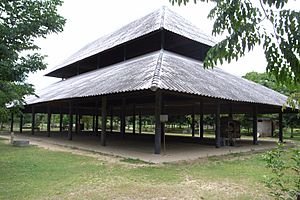 Buddhadasa's interpretations of the Buddhist tradition inspired such persons as the French-schooled Pridi Banomyong, leader of the Siamese revolution of 1932, and a group of Thai social activists and artists of the 20th century.

Religious scholar Donald K. Swearer has compared Buddhadasa to the early Indian philosopher Nagarjuna, and the 5th-century south Indian scholar Buddhaghosa who has "overshadowed the development of Theravada Buddhist thought" in southeast Asia. According to Swearer, the Thai teacher Buddhadasa "stands in polar opposition to such normative figures as Buddhaghosa" in several respects. Buddhadasa's writings, for example, decidedly contrast with the scholastic and highly influential Visuddhimagga of Buddhaghosa. Buddhadasa has been influential in the arannavasi (forest tradition) of Thai Buddhism, and his ideas have influenced the radical sectarian movement founder Santi Asoke, according to Swearer.

According to scholars such as Peter Jackson and Daniel Lynch, Buddhadasa was heavily influenced by the ideas found in Zen Buddhism. Buddhadasa considered the Zen ideas as a way to reconcile Theravada Buddhism with modern humanism, and thought them to be the reason for Japan's economic strength.

Buddhadasa's works take up an entire room in the National Library of Thailand. The following are some of his well-known books in English translation.

All content from Kiddle encyclopedia articles (including the article images and facts) can be freely used under Attribution-ShareAlike license, unless stated otherwise. Cite this article:
Buddhadasa Facts for Kids. Kiddle Encyclopedia.