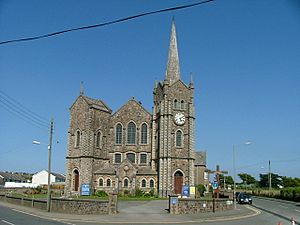 Bude–Stratton (Cornish: Bud–Strasnedh) is a coastal civil parish with a town council in Cornwall, England, United Kingdom. According to the 2001 census it had a population of 9,242. In 2011 (including Bush and Lynstone) this population had increased to 9,934.

Away from the coast, much of the parish is rural in character but it also encompasses the sizeable urban areas of Bude and Stratton. Other settlements include Poughill (formerly a separate parish), Bush, Flexbury, Lynstone, Maer, Northcott, Thorne and Upton.

The arms of the Bude-Stratton urban district council were: Arg. two bars wavy Az. within a bordure Sa. bezantee on a chief Gu. a cross formee of the field between two clarions Or.

Bude–Stratton is twinned with Ergue-Gaberic (An Erge Vras) in Brittany, France.

All content from Kiddle encyclopedia articles (including the article images and facts) can be freely used under Attribution-ShareAlike license, unless stated otherwise. Cite this article:
Bude–Stratton Facts for Kids. Kiddle Encyclopedia.