Bummi is the title of a German magazine for children in kindergarten age. The eponymous hero Bummi is an upright walking, yellow-furred teddy bear.

Bummi was first published on 15 February 1957 as a monthly in the GDR. From 1965 onwards, it was published biweekly and cost 0.25 Mark. It had a run of 736,300 copies in Verlag Junge Welt [de]. The magazine was officially published and supported by the central organisation of the FDJ with the aimed at age group of children from 3 to 6 years. It was sold at kiosks and ordinary magazine stands. The eponymous title character was designed by Ingeborg Meyer-Rey. long-serving main contributing editor Ursula Werner-Böhnke wrote the lyrics to the Bummi-Lied, to which the melody was composed by Hans Naumilkat. The lied became part of the educational system from 1969 onwards. 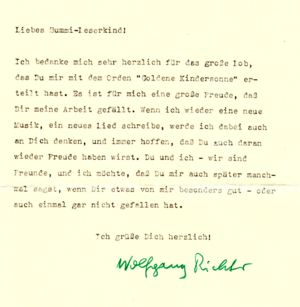 The children's composer Wolfgang Richter says thanks for a "Goldene Kindersonne".

At the beginning of the 1970s, the magazine introduced the "Goldene Kindersonne" (German for: "Golden Children's Sun"), which was an award, which the children could cut out of the magazine and give to a person of their choice. (in reference to other awards in the grown-up world) Children contacting the magazine to confer a "Goldene Kindersonne" award could obtain a standardised, but hand-signed thank-you letter from one of the famous contributing artists and authors.

All content from Kiddle encyclopedia articles (including the article images and facts) can be freely used under Attribution-ShareAlike license, unless stated otherwise. Cite this article:
Bummi Facts for Kids. Kiddle Encyclopedia.