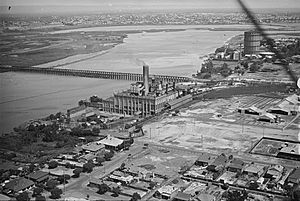 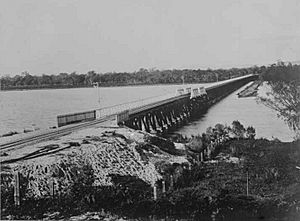 Bunbury Bridge was a single-track, timber railway bridge in East Perth in Western Australia. The bridge crossed the Swan River near Claise Brook and was built for passenger and freight traffic to Bunbury on the South Western Railway, and was also part of the Armadale railway line.

The Bunbury Bridge (then called the Swan Bridge) was built in 1892 by Atkins and Law. Construction was delayed due to troubles with sinking the jarrah piles into the soft riverbed: they were intended to be sunk 42 feet (13 m) below the water level, but reached this depth under their own weight as soon as they were put in position. Ultimately, they had to be driven to 85 to 96 feet (26 to 29 m) before a solid footing was found.

The bridge was opened as part of the Perth to Bunbury Railway, which was officially opened on 8 September 1893 by Governor Robinson. Following concerns for its safety, a so-called "temporary" replacement bridge was built between 1930 and 1932.

After 63 years of use, the temporary structure was closed when a new concrete railway bridge opened in 1995. The old timber bridge was demolished in early 1996. The 1995 concrete dual-track Goongoongup Bridge was built as part of the electrification of Perth's suburban railways. Windan Bridge (opened April 2000) is immediately adjacent and carries road traffic from the Graham Farmer Freeway.

All content from Kiddle encyclopedia articles (including the article images and facts) can be freely used under Attribution-ShareAlike license, unless stated otherwise. Cite this article:
Bunbury Bridge Facts for Kids. Kiddle Encyclopedia.