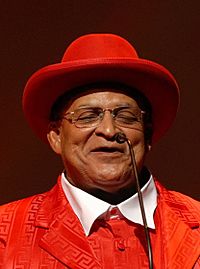 Edward O'Sullivan Lee OD (23 August 1941 – 6 October 2020), better known by the name Bunny "Striker" Lee, was a Jamaican record producer. In 2008 he was awarded the Order of Distinction by the Jamaican government in recognition of his contribution to Jamaican music.

Lee died on 6 October 2020 from respiratory and kidney failure, aged 79.

All content from Kiddle encyclopedia articles (including the article images and facts) can be freely used under Attribution-ShareAlike license, unless stated otherwise. Cite this article:
Bunny Lee Facts for Kids. Kiddle Encyclopedia.