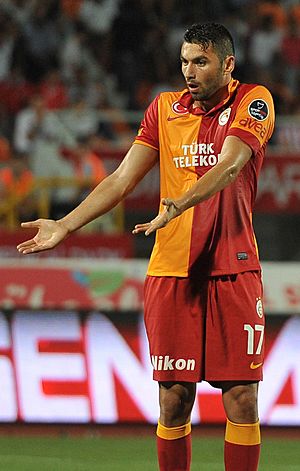 Burak Yılmaz (born 15 July 1985 in Antalya, Turkey) is a Turkish professional footballer who plays as a striker. Since 5 February 2016, he has played for Beijing Guoan and the Turkey national team. He has also played for all of the big four clubs in the Turkey: Beşiktaş, Fenerbahçe, Trabzonspor and Galatasaray; along with Antalyaspor, Manisaspor and Eskişehirspor.

He scored his first goal against Karşıyaka during the 2004–05 season.

All content from Kiddle encyclopedia articles (including the article images and facts) can be freely used under Attribution-ShareAlike license, unless stated otherwise. Cite this article:
Burak Yılmaz Facts for Kids. Kiddle Encyclopedia.