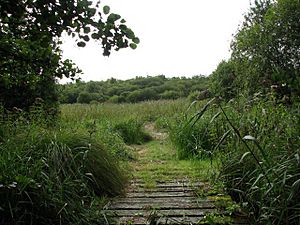 It is mostly fen land and includes four Broads which are disused peat workings dug between 900 and 1350:

This area of unreclaimed marshland supports many plants and animals, including rarities such as the crested buckler fern, rare moths and spiders, and some of Britain's rarest aquatic insects.

In open fens, reed, sedge and marsh hay are still harvested, mainly for the thatching industry.

All content from Kiddle encyclopedia articles (including the article images and facts) can be freely used under Attribution-ShareAlike license, unless stated otherwise. Cite this article:
Bure Marshes National Nature Reserve Facts for Kids. Kiddle Encyclopedia.