The Burnaby Village Museum, previously known as the Heritage Village, is an open-air museum in Burnaby, British Columbia, Canada, located at Deer Lake Park. It is open seasonally from May to September and opens for special events taking place September to March. The Burnaby Village Museum is a reconstructed 1920s village, containing 31 full scale buildings; its costumed staff demonstrate traditional trades. The museum spans 10 acres (4 ha) of land. Some of the buildings are original heritage buildings, moved from other locations in the community and restored. Others are replica buildings, created to house specific displays and artifacts, including a 1912 B.C. Electric Railway interurban tram. The Museum is also known for the 1912 C. W. Parker Carousel, available for visitors to ride.

Founded in 1971, the Museum was originally known as the Heritage Village. It has grown from a 4.3-acre (1.7 ha) site with a small number of displays, to a 10-acre (4 ha) heritage site and major attraction in Metro Vancouver.

On November 19, 1971 the official opening of the museum took place, officiated by Roland Michener, then Governor General of Canada. Over 15,000 visitors attended the museum during its special three-day opening. It opened for its first season in 1972, and included several shops located in replica buildings on the main street, and the "manor house" (the 1922 home of the Bateman family, today known as Elworth). Livestock was part of the display, including horses who were shod in the blacksmith shop. An early promotional brochure promised visitors they would be able to "smell the burning hoof."

In 1975, the B.C. Society of Model Engineers opened a model railway at the Village. The same year, a Chinese Herbalist display was opened, and a 1911 bachelor's house built by Burnaby resident Tom Irvine was moved to the site.

In 1976, the Royal Bank building from Britannia Beach was moved to the Village, as well as a 1927 Burnaby heritage building set up as a real estate and surveyor's office. In partnership with the Japanese-Canadian Citizens Association, an ofuru (Japanese bathhouse) display was opened at the Village in 1977. The replica ofuru was built to commemorate the arrival in B.C. of the first Japanese immigrant in 1877. The Vorce B.C. Electric railway station was also acquired in 1977.

In 1979, the Heritage Village became the set for the Canadian/German co-production of the 26-part TV series Huckleberry Finn and His Friends.

In 1984, the Museum's name was changed from "Heritage Village" to "Burnaby Village Museum" to reflect its role as Burnaby's community museum. Iredale Partnership was hired in 1985 to create an expansion concept for Burnaby's Municipal Council to consider. The plan was completed in 1986, and accepted by Council in 1987. At that time, the site was expanded to approximately 9 acres, with new lands across Deer Lake Brook made available to the Museum to expand, and to create a new entrance facility and administration building.

In 1987 the Seaforth School display was opened at the Village, with the restored 1922 school open to the public. By 1989, the popular "3R's" school program was being offered on a regular basis at the schoolhouse. In 1988, the 1893 Jesse and Martha Love farmhouse was acquired and moved to the Museum, to be part of the "rural zone" display established in the newly acquired museum space across Deer Lake Brook.

In 1989, the miniature railway moved to Confederation Park. That same year, the PNE's historic carousel was decommissioned. The Friends of the Carousel were formed to raise the money to purchase and restore the 1912 carousel. Burnaby promised to provide a building for the carousel at the Burnaby Village Museum.

In 1990, the Municipality of Burnaby took over operation of Burnaby Village Museum from the Century Park Museum Association. In 1993 the C.W. Parker Carousel was officially opened, housed in the newly constructed Don Wrigley Pavilion. The Museum's popular "Business as Usual" school program was launched in 1999, with "Home Sweet Home" following soon behind in 2000. In 2000, the museum opened its "Stride Studios" temporary exhibit gallery, allowing for temporary exhibits that explored topics beyond Burnaby in the 1920s to be featured as part of the visitor experience.

In 2001, the Museum's 1912 British Columbia Electric Railway interurban tram was moved offsite to a warehouse, where it would undergo a 5-year restoration project by the Friends of Interurban 1223. In 2007, the restored Interurban 1223 was returned to the Museum, and installed in the newly constructed tram barn. Vorce station was installed adjacent to the tram barn, and was restored to its original appearance in 2008 under the auspices of the City of Burnaby Community Heritage Commission.

The Burnaby Village Museum was an official stop for the Olympic Torch Relay in 2010. In celebration of the 40th anniversary of the Museum, Burnaby City Council agreed to offer free admission to museum visitors for the 2011 summer and Christmas seasons.

The following is from the Burnaby Village Museum Visitors Map. 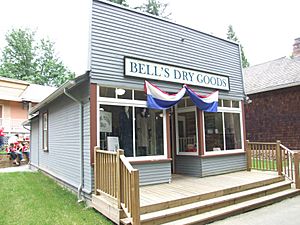 All content from Kiddle encyclopedia articles (including the article images and facts) can be freely used under Attribution-ShareAlike license, unless stated otherwise. Cite this article:
Burnaby Village Museum Facts for Kids. Kiddle Encyclopedia.