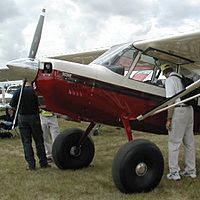 An American Champion Scout. Note the large "tundra tires", for use on rough surfaces.

A bush airplane is an aircraft serving far away areas of a country, usually the African, Alaskan, and Canadian tundra or the Australian Outback. They are used where the road system is not good, or where there are no roads. Many planes used as bush planes are made by Cessna, or other makers of small and medium-sized airplanes 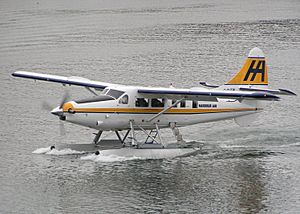 A DeHavilland Single Otter with floats for water landings.

All content from Kiddle encyclopedia articles (including the article images and facts) can be freely used under Attribution-ShareAlike license, unless stated otherwise. Cite this article:
Bush airplane Facts for Kids. Kiddle Encyclopedia.