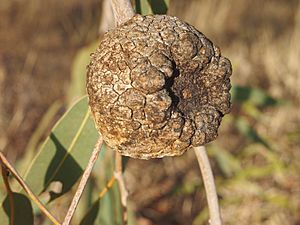 The Bush coconut, or bloodwood apple, is an Australian bush tucker food, often eaten by Indigenous people of Central Australia.

The bush coconut is, in fact, a combination of plant and animal: an adult female scale insect, Cystococcus pomiformis, lives in a gall induced on a bloodwood eucalypt (Corymbia terminalis).

The gall looks like a small, knobbly woody fruit, ranging in size from a golf ball to a tennis ball, with a milky white flesh inside upon which the insect and its male offspring feed.

Bush coconut is called Merne arrkirlpangkwerle in the Arrernte language of Central Australia. The gall is picked and then cracked open with a rock. The Arrernte call the insect angure.

All content from Kiddle encyclopedia articles (including the article images and facts) can be freely used under Attribution-ShareAlike license, unless stated otherwise. Cite this article:
Bush coconut Facts for Kids. Kiddle Encyclopedia.