The Buttercups Sanctuary for Goats is a British charitable organisation devoted to goat welfare. The charity, which is based in Maidstone, Kent, England, was established in 2003. It is the only goat charity in the whole of the UK.

The Buttercups Sanctuary started in 1989 when Robert and Valerie Hitch took over the care of two goats from the RSPCA. As more goats arrived, having become unwanted or been neglected, the costs of keeping them soared, so they were granted charity status by the Charity Commission for England and Wales in September 2003. 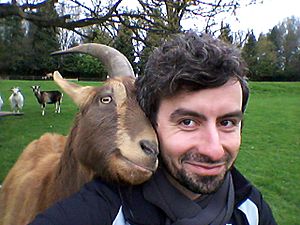 A goat at Buttercups Sanctuary

The sanctuary now cares for over 140 goats and provides care to approximately an additional 120 goats in foster homes.

Common problems for goats arriving at the sanctuary include malnutrition and ailments such as rainscald, foot rot, mud fever and other skin conditions. They may also be infested with worms. Neglect and cruelty may also mean, that on arrival, the animals may be very mistrustful of humans. Yet, many do recover human trust again.

The sanctuary offers student work-placements to assist with their studies.

Some of this research work has been featured on prime-time British television.

All content from Kiddle encyclopedia articles (including the article images and facts) can be freely used under Attribution-ShareAlike license, unless stated otherwise. Cite this article:
Buttercups Sanctuary for Goats Facts for Kids. Kiddle Encyclopedia.