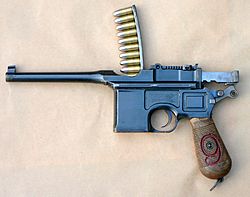 The Mauser C96, is a German semi automatic pistol that has a broomhandle pistol grip. The pistol was originally produced by German arms manufacturer Mauser.

The German Army used C96s in World War I and World War II. During World War II the C96 got replaced by the P38. C96s are used by many countries including Germany, Spain, China, and the Soviet Union. The C96 was produced by Germany from 1896 and ended in 1937. The Chinese Army nicknamed the C96 called boxcannon.

All content from Kiddle encyclopedia articles (including the article images and facts) can be freely used under Attribution-ShareAlike license, unless stated otherwise. Cite this article:
C96 Facts for Kids. Kiddle Encyclopedia.