CC's (pronounced sea-seas and short for “corn chips”) is an Australian brand of flavoured tortilla chips produced since the early 1980s, originally by The Smith's Snackfood Company, and currently by Snack Brands Australia . CC's are predominantly sold in Australia and come in assorted flavours. CC's were also sold in New Zealand until Bluebird Foods (the owner of the CC's brand in New Zealand) decided to locally produce the American brand Doritos in March 2010. However, the CC's brand returned to New Zealand shelves for a limited run in 2019. CC's are 100% Australian manufactured. 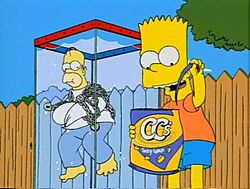 In June 1998, The Simpsons featured on a set of television commercials with each commercial involving Homer Simpson wanting Bart Simpson's CC's, so Bart would make Homer do an outlandish stunt (a dare) to get them. Homer would never succeed because of Bart. Each commercial ended with a pun on the famous tagline "You can't say no" with Dan Castellaneta saying "CC's, you can't say..." and then Homer would say "D'oh!".

These adverts were similar to the Butterfinger adverts that aired in the United States from 1988 to 2001. Even though the commercials only ran on Australian television, they have been included in the DVD release of season 10.

All content from Kiddle encyclopedia articles (including the article images and facts) can be freely used under Attribution-ShareAlike license, unless stated otherwise. Cite this article:
CC's Facts for Kids. Kiddle Encyclopedia.