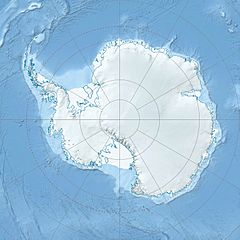 Cadwalader Inlet is an ice-filled inlet about 22 nautical miles (40 km) long, indenting the northeast coast of Thurston Island between Evans Peninsula and Lofgren Peninsula. It was discovered on helicopter flights from the USS Burton Island and USS Glacier by personnel of the U.S. Navy Bellingshausen Sea Expedition in February 1960. It was named by the Advisory Committee on Antarctic Names for Captain John Cadwalader, U.S. Navy, chief of staff to U.S. Antarctic Projects Officer and representative of Task Unit Commander aboard the Burton Island in February 1960.

All content from Kiddle encyclopedia articles (including the article images and facts) can be freely used under Attribution-ShareAlike license, unless stated otherwise. Cite this article:
Cadwalader Inlet Facts for Kids. Kiddle Encyclopedia.