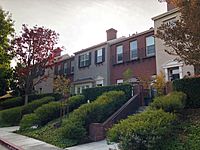 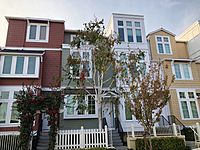 The park is named after Hiram B. Cahill, who originally owned the land where the park and nearby Diridon Station (formerly Cahill Depot). Hiram's widow, Mary Welch Cahill, eventually sold the land to Southern Pacific Railroad with the request that the station they erect be named in his memory.

The Cahill Park neighborhood is one of the affected stakeholders in Google's planned revitalization of the Diridon area of Downtown San Jose.

Cahill Park is located to the west of Diridon Station, at the beginning of West San Fernando Street.

It is within walking distance of The Alameda and the SAP Center.

All content from Kiddle encyclopedia articles (including the article images and facts) can be freely used under Attribution-ShareAlike license, unless stated otherwise. Cite this article:
Cahill Park Facts for Kids. Kiddle Encyclopedia.