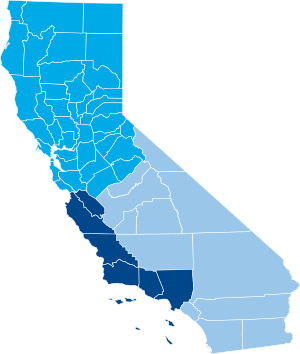 Cal 3 (also called Proposition 9) is a halted 2018 voter initiative to split California into three states. It was introduced by Tim Draper. If it passed, California would not be immediately split. The U.S. Congress would need to approve.

Supporters of the split said the state is too large to govern efficiently, and those against said the split is a waste of time and resources.

The initiative was taken off of the ballot in July 2018 by the Supreme Court of California. Tim Draper called the decision "corrupt."

All content from Kiddle encyclopedia articles (including the article images and facts) can be freely used under Attribution-ShareAlike license, unless stated otherwise. Cite this article:
Cal 3 Facts for Kids. Kiddle Encyclopedia.