Caladenia filifera, commonly known as the blood spider orchid, is a species of orchid endemic to the south-west of Western Australia. It has a relatively common orchid in its natural range, often forming clumps, and has a single hairy leaf and up to three blood-red flowers. 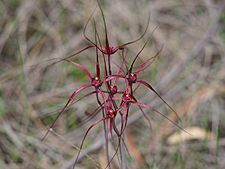 Caladenia filifera was first described by John Lindley in 1840 and the description was published in A Sketch of the Vegetation of the Swan River Colony. The specific epithet (filifera) is derived from the Latin word filum meaning "a thread" and the suffix -fero meaning "to bear" or "to carry".

The blood spider orchid occurs near Watheroo in the Avon Wheatbelt, and Jarrah Forest biogeographic regions where it grows in well-drained soils in forest and scrubland. Its flowering is stimulated by fires in the previous summer. It previously was more widespread but its distribution has been reduced due to changes in fire regimes.

Caladenia filifera is classified as "not threatened" by the Government of Western Australia Department of Parks and Wildlife.

All content from Kiddle encyclopedia articles (including the article images and facts) can be freely used under Attribution-ShareAlike license, unless stated otherwise. Cite this article:
Caladenia filifera Facts for Kids. Kiddle Encyclopedia.