The Calf Pasture Pumping Station Complex is a historic sewage treatment facility at 435 Mount Vernon Street on Columbia Point in the Dorchester section of Boston, Massachusetts which was built in the 1880s.

The surrounding community was, in the 17th and 18th centuries, and through to the mid-19th century, a calf pasture: a place where nearby Dorchester residents took their calves for grazing. It was largely an uninhabited marshland on the Dorchester peninsula. Its size was originally 14 acres (5.7 ha). Many landfills, subsequent to that time, have enlarged the land size to 350 acres (140 ha) in the 20th century. 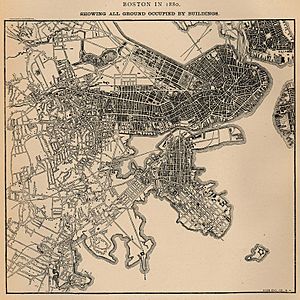 Map showing all ground in Boston occupied by buildings in 1880. Columbia Point is in the center near bottom with two roads going out to the pumping station and calf pasture. From U.S. Census Bureau.

In the 1880s, the calf pasture was used as a Boston sewer line and pumping station, known as the Calf Pasture Pumping Station Complex. This large granite structure, the first sewage treatment station built in the city, was built in 1883. It still stands and in its time was a model for treating sewage and helping to promote cleaner and healthier urban living conditions. It pumped waste to a remote treatment facility on Moon Island in Boston Harbor, and served as a model for other systems worldwide. This system remained in active use and was the Boston Sewer system's headworks, handling all of the city's sewage, until 1968 when a new treatment facility was built on Deer Island. The pumping station is also architecturally significant as a Richardsonian Romanesque designed by the then Boston city architect, George Clough. It is also the only remaining 19th century building on Columbia Point.

The facility was listed on the National Register of Historic Places in 1990. This building is currently under study as a Boston Landmark by the Boston Landmarks Commission.

All content from Kiddle encyclopedia articles (including the article images and facts) can be freely used under Attribution-ShareAlike license, unless stated otherwise. Cite this article:
Calf Pasture Pumping Station Complex Facts for Kids. Kiddle Encyclopedia.