At about 12 in (30 cm) and nearly 85 g (3.0 oz), the California thrasher is the largest species of mimid. It has a distinctive long, decurved beak, and is generally brown, with buffy underparts and undertail (unlike the crissal). It has a dark cheek pattern and eye-line, and unlike most thrashers, has dark eyes. The California thrasher eats insects and small invertebrates, which it uncovers by tossing its beak in ground litter. 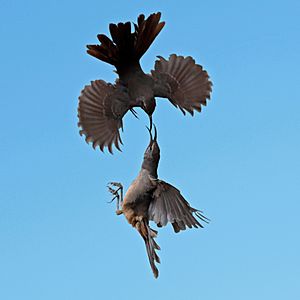 All content from Kiddle encyclopedia articles (including the article images and facts) can be freely used under Attribution-ShareAlike license, unless stated otherwise. Cite this article:
California thrasher Facts for Kids. Kiddle Encyclopedia.