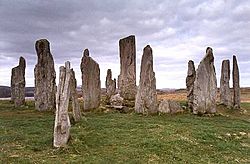 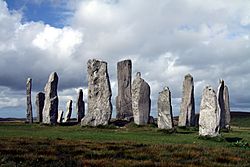 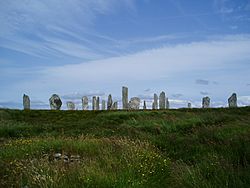 A distant view of the circle, stone rows and part of the northern avenue

The Callanish stones are near the village of Callanish (Gaelic: Calanais) on the west coast of Lewis in the Outer Hebrides (Western Isles of Scotland).

The site was built between 2900 and 2600 BC, though there were possibly earlier buildings before 3000 BC. A tomb was later built into the site. The 13 primary stones form a circle about 13 m in diameter, with a long approach avenue of stones to the north, and shorter stone rows to the east, south, and west. The overall layout of the monument recalls a distorted Celtic cross. The individual stones vary from around 1 m to 5 m in height, with an average of 4 m, and are of the local Lewisian gneiss.

The first written reference to the stones was by Lewis native John Morisone, who in c. 1680 wrote that "great stones standing up in ranks [...] were sett up in place for devotione".

The tallest of the stones marks the entrance to a burial cairn where human remains have been discovered. An excavation campaign in 1980 and 1981 showed that the burial chamber was a late addition to the site, and that it had been modified a number of times.

All content from Kiddle encyclopedia articles (including the article images and facts) can be freely used under Attribution-ShareAlike license, unless stated otherwise. Cite this article:
Callanish stones Facts for Kids. Kiddle Encyclopedia.