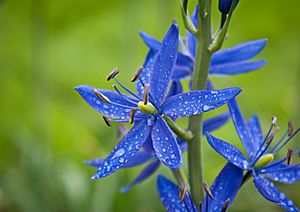 Camassia howellii, commonly known as Howell's camas, is a species of perennials endemic to western Oregon.

Discovered in 1889, Camassia howellii is now considered to be imperiled due to residential development, mining and grazing.

Camassia howellii is found exclusively in the southwestern region of Oregon. The 12 populations make up a total of 3000 plants. These sites are threatened by human developments. This species is currently under the global conservation status rank G2 Imperiled. Although other species of Camassia are still abundant in the Northwest, this one is not in Oregon.

Camassia howellii thrives in wet meadows in serpentine soil. They are found in eastern Oregon where precipitation levels range from 70 to 100 inches per year and temperatures from 40 to 80 degrees Fahrenheit per year. These perennials are late bloomers usually during the month of May and the flowers will wither in the autumn.

Camassia howellii grows from a bulb and has 60 cm long basal leaves which range around 4 to 7 per plant.

The plant's inflorescences reach about 15 to 40 cm (6 to 15.5 in) long which are usually bluish violet. The flowers are actinomorphic made up of five 20 mm (0.79 in) long petals. There can be 100 flowers in a raceme. These flowers sit atop a stem about 50 cm (19.5 in) tall. The flowers are radially symmetrical and are composed of five deep bluish violet petals. The petals range from 10 to 20 mm long and about 3 to 5 mm wide. This species is known to bloom in the month of May.

Native Americans and settlers considered Camassia howellii as an important part of their diet. The city of Camas in Washington and many parts of the Northwestern United States was named after this plant due to its large cultivation and consumption by the Native Americans and first white settlers.

In autumn the bulbs were harvested after the flowers dried up and were boiled or pit-cooked. The bulbs were also dried and ground into flour. As the settlers began to expand their territory, they raised cattle which limited the growth of camas in the area.

All content from Kiddle encyclopedia articles (including the article images and facts) can be freely used under Attribution-ShareAlike license, unless stated otherwise. Cite this article:
Camassia howellii Facts for Kids. Kiddle Encyclopedia.