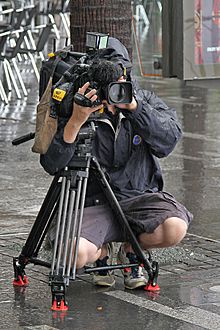 Important camera operator skills include choreographing and framing shots, knowledge of and the ability to select appropriate camera lenses, and other equipment (dollies, camera cranes, etc.) to portray dramatic scenes. The principles of dramatic story telling and film editing fundamentals are important skills as well. The camera operator is required to communicate clearly and concisely on sets where time and film budget constraints are ever present.

All content from Kiddle encyclopedia articles (including the article images and facts) can be freely used under Attribution-ShareAlike license, unless stated otherwise. Cite this article:
Cameraman Facts for Kids. Kiddle Encyclopedia.