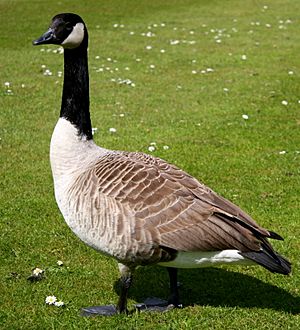 Canada geese (Branta canadensis) were introduced as a game bird into New Zealand in 1905. They became problematic because of the damage caused to pastures and crops.

Canada geese were introduced as a game bird into New Zealand in 1905. They were protected under the Wildlife Act of 1953 and the population was managed by Fish and Game New Zealand who culled excessive bird numbers. The number of birds increased and by 1996 they had reached an estimated population of 40,000 in the South Island. In 2011 the government removed the protection status allowing anyone to kill the birds.

Canada geese are often seen in pastures and in the braided river valleys of the South Island and damage to pastures was reported as early as 1925. They affect pastures by competing for food with the farmed animals and by leaving droppings. The birds may also be responsible for some damage to crops.

All content from Kiddle encyclopedia articles (including the article images and facts) can be freely used under Attribution-ShareAlike license, unless stated otherwise. Cite this article:
Canada geese in New Zealand Facts for Kids. Kiddle Encyclopedia.