Lake Rotoroa (or Hamilton Lake Domain) is a lake in Hamilton, Waikato, North Island, New Zealand. It has a surface area of about 54 hectares and an average depth of 2.4 metres. It is the home of the Hamilton Yacht Club, which holds regular sailing in the summer.

Lake Rotoroa formed, like most of the Waikato lakes, about 20,000 years ago, when the Waikato changed to flow out at Port Waikato, rather than at Thames. It was a braided river, but most of its braided courses were left as lakes once the river cut its present lower level. Peat then dammed and increased the size of the lakes.

Innes Common, to the west, is 68 acres (28 ha) of former wetland, bought by the Domain Board to protect the lake and drained some time after 1883. It was named after the Innes family from 1956.

On Ruakiwi Rd an ivy-covered memorial arch to Arthur Swarbrick, former chairman of the Hamilton Domain Board, dates from 1929.

The lake is sometimes affected by cyanobacteria, due to its high nutrient levels. However, the eutrophic quality of the lake has improved since 1998 due to regrowth of macrophytes, such as charophytes.

In 1959 11,000 litres of sodium arsenate was poured in the lake to control weeds. Arsenic is still in the sediment and eating fish from the lake is not recommended; it's on Regional Council's contaminated sites list. Copper, lead, mercury and zinc also exceed the Australian and New Zealand Environment and Conservation Council (ANZECC) guideline value in parts of the lake. 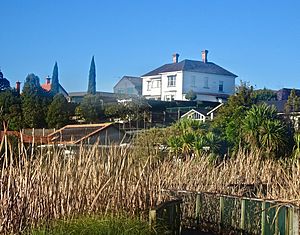 Lake House viewed from the boardwalk. It was designed by Isaac Richardson Vialou in 1872 for Alfred Cox as the homestead of the Rukuhia Estate, which originally covered 6,000 hectares. Vialou became first mayor of Hamilton in 1878.

Lake Rotoroa is a venue for many sports.

At Innes Common, a park on the east side of the lake is the Waikato Hockey Association Sports Ground.

Innes Common also provides the best access to the lake for watersports. Small sailing boats and canoes are frequently seen on the lake. The lake is too small for rowing skiffs because as soon as they get up to top speed they have to stop. The lake is better suited to slower boats that can turn easily.

The 3.8 km scenic path around the lake makes it a suitable venue for walking and running. The Hamilton Road Runners Club is based at the Hamilton Yacht Club and meets there for runs every Thursday evening and Saturday morning, as well as hosting a running event at the lake each year in summer. There are water fountains at the playground at the north-west side of the lake and also at Innes Common.

There are also short bush walks and a small golf green on the west side of the lake.

All content from Kiddle encyclopedia articles (including the article images and facts) can be freely used under Attribution-ShareAlike license, unless stated otherwise. Cite this article:
Lake Rotoroa (Hamilton, New Zealand) Facts for Kids. Kiddle Encyclopedia.