Thames is a town at the southwestern end of the Coromandel Peninsula in New Zealand's North Island. It is located on the Firth of Thames close to the mouth of the Waihou River. The town is the seat of the Thames-Coromandel District Council. The Māori iwi are Ngāti Maru, who are descendants of Marutuahu's son Te Ngako. Ngāti Maru is part of the Ngati Marutuahu confederation of tribes or better known as Hauraki Iwi.

Many people migrated to Thames at its peak, and it was soon the second-largest city in New Zealand (the largest being Dunedin then Auckland). However, as the gold began to diminish, so did the number of inhabitants, and although Thames never shrank, it has never grown much either. It is still the biggest town on the Coromandel. The population in the 2006 census was 6,756, an increase of 51 since 2001. Until 2016, a historical oak tree that was planted by Governor George Grey stood on the corner of Grey and Rolleston streets. 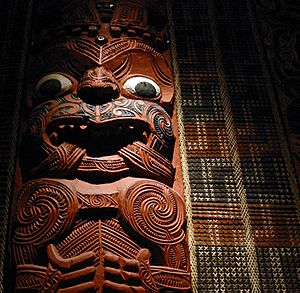 Thames was formed from two historic towns, Grahamstown and Shortland, of which many original buildings still stand. Shortland was to the south of Thames and was founded on 27 July 1867 when James Mackay, civil commissioner for the Hauraki District, concluded an agreement with local Māori. The land was rented for mining purposes for the sum of £5,000 per year, a colossal sum in the mid 19th century. This agreement secured the rights to local mineral deposits leading to the proclamation of the Thames Goldfield on 1 August. The leasing of the land for such a huge income was a source of great envy by other Maori iwi and hapu.

Grahamstown was founded the following year at the northern end of present Thames, approximately one mile from Shortland. The two towns merged in 1874 after it emerged the heart of the Goldfield was in Grahamstown. Shortland waned in importance until the turn of the century when the Hauraki Plains were developed for farming and the Shortland railway station was opened.

The town was initially built during a gold rush, with the first major discovery of gold being made on 10 August 1867 by William Hunt, in the Kuranui Stream at the north end of Thames. The subsequent mine produced more than 102,353oz bullion and was known as the Shotover. The era from 1868 to 1871 were the bonanza years for the town with gold production topping one million pounds sterling at its peak. Official figures for production of the Thames Mines recorded a yield of 2,327,619oz bullion with the value at $845 million. The three richest fields were the Manukau / Golden Crown / Caledonian mines but many others yielded near equivalent amounts. Towards the end of the 19th century, Thames was the largest centre of population in New Zealand with 18,000 inhabitants and well over 100 hotels and three theatres in 1868. For a while, it was thought it would replace Auckland as the major town in the area. Thames also benefited from a period of extensive Kauri logging in the surrounding ranges around the same time.

The land involved in goldmining in Thames was Māori-owned; important parts of the goldfield were owned by the Ngāti Maru rangatira (chief) Rapana Maunganoa and the Taipari family. In 1878, when Wiremu Hōterene Taipari married a woman of the Ngāti Awa tribe of Whakatāne, Ngāti Awa carvers arrived at Thames and built a meeting house at Pārāwai. It is incorrectly said to have been a wedding gift for the couple when actually Wiremu's father had paid money for another whare (meeting house), which was sold to the governor general at the time. When Wiremu's father returned to collect the whare the Ngati Awa chief apologised and said he would have another one built which would signify the marriage between Wiremu Taipari and his daughter. The house, named Hotunui in honour of an important Ngāti Maru ancestor, now stands in the Auckland War Memorial Museum.

The Thames branch railway connecting the town with Hamilton was opened in 1898 and was closed in 1991 and the tracks were taken up. It now provides part of the course for the Hauraki Rail Trail. The Carters - Kopu sawmill, 9 km south of Thames, closed in 2008 with the loss of 145 jobs. In 2012, mayor of Thames-Coromandel called NZTA safety procedures into question when a sink hole on State Highway 25 north of Thames, opened above an old mine shaft.

All content from Kiddle encyclopedia articles (including the article images and facts) can be freely used under Attribution-ShareAlike license, unless stated otherwise. Cite this article:
Thames, New Zealand Facts for Kids. Kiddle Encyclopedia.