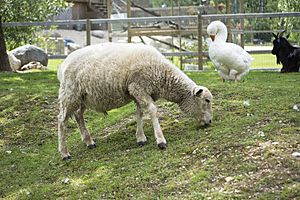 The Canadian Arcott is a breed of domestic sheep native to Canada. The latter half of its name is an acronym for the Animal Research Centre in Ottawa, where it was developed along with the Rideau Arcott and the Outaouais Arcott. This breed was a result of a crossbreeding program of Suffolk (37%), Ile de France (28%), Leicester (14%), North Country Cheviot (7%) and Romnelet (6%); the remaining 8% was contributed from Shropshire, Lincoln, Southdown Dorset, East Friesian, Finnsheep and Corriedale.

This breed was developed to exhibit strong meat characteristics. Mature individuals are medium-sized as well as short and thick. These animals are able to adapt to pasture or confinement systems with ease.

Canadian Arcotts have white or mottled faces that are free of winkles and wool. This breed is described as having a soft and lustrous fleece of medium grade. They have heavily muscled legs and a long narrow tail that is covered with wool.

Ewes reach sexual maturity at 230 days old and weigh approximately 49 kg. Ewes lamb at eight-month intervals in February and October; the length of gestation is typically 147 days. About 65% of ewes produce multiple births.

Rams are used in many breeding programs to improve the meat characteristics of other breeds.

All content from Kiddle encyclopedia articles (including the article images and facts) can be freely used under Attribution-ShareAlike license, unless stated otherwise. Cite this article:
Canadian Arcott Facts for Kids. Kiddle Encyclopedia.