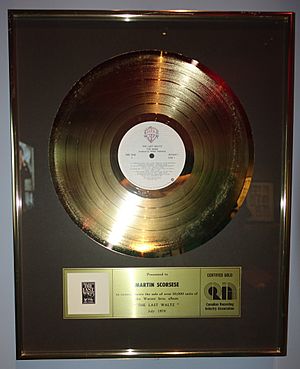 The Canadian Recording Industry Association is a non-profit trade organization that was founded in 1964 to represent the interests of Canadian companies that create, manufacture and market sound recordings in Canada. The organization is based in Toronto.

CRIA is governed by a board of directors who are elected annually by CRIA members. To be eligible for election a candidate for the board must be among the chief executive officers of member companies of the organization. Graham Henderson (Universal Music Canada) is the current president of the CRIA.

The CRIA certifications for albums are:

Note: Multi-Platinum refers to how many times the album has reached 100,000 units sold.

All content from Kiddle encyclopedia articles (including the article images and facts) can be freely used under Attribution-ShareAlike license, unless stated otherwise. Cite this article:
Canadian Recording Industry Association Facts for Kids. Kiddle Encyclopedia.