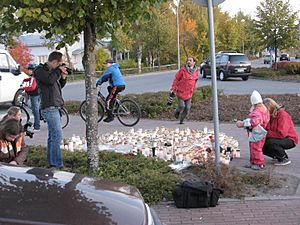 People and the media at a vigil in Kauhajoki, Finland one day after a shooting incident.

A candlelight vigil is where a group of people mourn the loss of someone who was close to them. These events are usually held at sunset. Many vigils can be for someone who recently died and are remembered with silence and a candle burning.

All content from Kiddle encyclopedia articles (including the article images and facts) can be freely used under Attribution-ShareAlike license, unless stated otherwise. Cite this article:
Candlelight vigil Facts for Kids. Kiddle Encyclopedia.