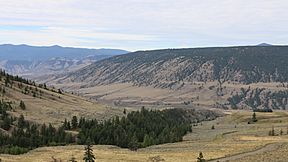 Canoe Creek flows down toward the Fraser River valley

Canoe Creek is a creek flowing generally west in a zig zag course into the Fraser River in the Cariboo region of British Columbia, Canada, joining that river south of Gang Ranch.

Though one source says that name derives from a canoe early miners found at the location, the original version of the name, in French, was La Rivière du Canot, so-named because it was here that explorer Simon Fraser cached his canoe and continued his journey southwards down that river on foot. His crew of voyageurs named the location Le Canot.

Canoe Creek is the namesake of three of the Indian reserves of the Canoe Creek Band/Dog Creek Indian Band:

All content from Kiddle encyclopedia articles (including the article images and facts) can be freely used under Attribution-ShareAlike license, unless stated otherwise. Cite this article:
Canoe Creek (British Columbia) Facts for Kids. Kiddle Encyclopedia.