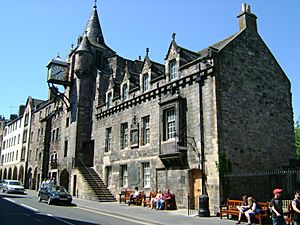 The Canongate Tolbooth, built in 1591.

Canongate Tolbooth is a historic landmark of the Old Town area of Edinburgh, built in 1591 as a tolbooth, that is, the centre of administration and justice of the then separate burgh of the Canongate which was outside the Edinburgh town walls. The building is now occupied by The People's Story Museum and is protected as a category A listed building.

The tower of the tolbooth was built in 1591, and the block to the east of it at that time or slightly after, by Sir Lewis Bellenden, baron of Broughton and feudal superior of the burgh of Canongate and Lord Justice Clerk of Scotland. It was the courthouse, burgh jail and meeting place of the town council.

In 1875 the City Architect, Robert Morham, extensively restored and remodelled the exterior. Internally the first and attic floors were combined to make a single floor, now The People's Story Museum. 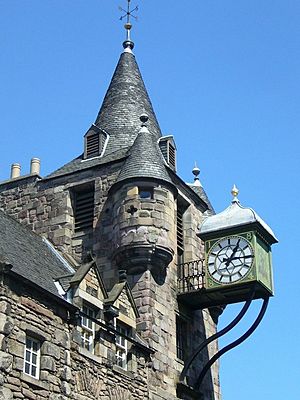 The clock with bartizans to either side and the conical spire

The Tolbooth comprises a bell tower with a lower block to the east that contained the council chamber and courtroom. The tower has two bartizans with ornamental gunloops on either side of a clock, dated 1884, which is suspended over the Royal Mile by wrought iron brackets. Above the bartizans is a conical spire while at street level there is a round-arched pend that leads into Tolbooth Wynd. Architectural features of the east block include a stone forestair which leads to a door next to the tower, an oriel window, and four pedimented dormers by Morham, based on Gordon of Rothiemay's map of 1647, that replaced three piended ones.

All content from Kiddle encyclopedia articles (including the article images and facts) can be freely used under Attribution-ShareAlike license, unless stated otherwise. Cite this article:
Canongate Tolbooth Facts for Kids. Kiddle Encyclopedia.