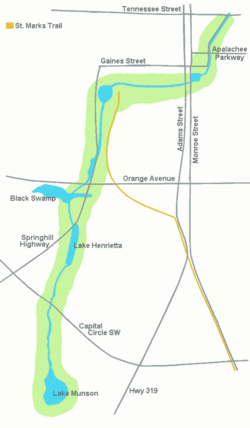 The Capital Cascade Greenway is a 6-mile (9.6 km) long greenway through downtown Tallahassee that follows the course of the St. Augustine Branch, a small creek that flows south through Cascades Park, Black Swamp, and ends in Lake Munson. The project corridor includes both public and private land.

The birth of the Capital Cascade Greenway came from Tallahassee's Blueprint 2000, an initiative to provide stormwater, trail and road projects that are efficient, attractive, environmentally responsible, and support the revitalization of in-town and southside neighborhoods. It is funded by an extension of the local one-cent sales tax approved by voters in November 2000. The U.S. Environmental Protection Agency and the Department of Community Affairs have invested $7.8 million to the project. The Trust for Public Land is also a partner in the greenway's creation.

The greenway will address stormwater and flooding problems in southern Tallahassee where the St. Augustine Branch basin slopes steeply near downtown. Almost the whole basin is built upon which has increased the amount of impervious surfaces leaving no absorption area for rain.

Capital Cascade Greenway will include trails for walking, and biking and link to the St. Mark's Trail, the Bow Tie Trail and the proposed Gopher, Frog and Alligator Trail (GFA.) The greenway will also have parks and playgrounds, businesses and shops and an opportunity to preserve a historic section of Florida's capital city. Parts of the corridor house the Korean War Memorial as well as historic plaques that commemorate the beginnings of Tallahassee and the State of Florida. The corridor is also very close to a number of structures listed on the National Register of Historic Places as well as historic neighborhoods such as Stearns-Mosely.

All content from Kiddle encyclopedia articles (including the article images and facts) can be freely used under Attribution-ShareAlike license, unless stated otherwise. Cite this article:
Capital Cascade Greenway Facts for Kids. Kiddle Encyclopedia.