Capitol Square is a public square in Downtown Columbus, Ohio. The square includes the Ohio Statehouse, its 10-acre (4.0 ha) Capitol Grounds, as well as the buildings and features surrounding the square. The Capitol Grounds are surrounded on the north and west by Broad and High Streets, the main thoroughfares of the city since its founding, forming the city's 100 percent corner. The grounds are surrounded by 3rd Street on the east and State Street on the south. The oldest building on Capitol Square, the Ohio Statehouse, is the center of the state government, and in the rough geographic center of Capitol Square, Columbus, and Ohio.

The 10-acre (4.0 ha) statehouse grounds were donated by four prominent Franklinton landholders to form the new state capitol. As the city's downtown began to empty in the mid-20th century, several buildings on the square were demolished. A construction boom downtown in the 1970s and 80s led to nearly all spaces being occupied again. The last large empty parcels, on 3rd Street, are aimed to be developed in the 2020s. 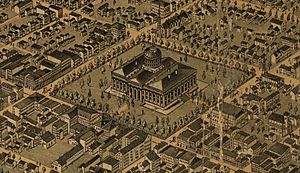 The square facing southeast in 1893 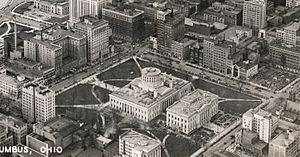 Buildings formerly on Capitol Square include the Neil House hotel (three buildings which existed on the square), the Columbus Board of Trade building, the former Columbus City Hall, a former location of the First Congregational Church, an early Huntington Bank, and the Deshler Hotel.

As the center of downtown Columbus, the square has high resident and visitor foot traffic. Programs for tourists include the Columbus Art Walk's Capitol Square tour, taking visitors around historical and architectural sites, sculptures, and other landmarks.

Capitol Square is the location of many protests held in the city. Recent protests have included those against Ohio's stay-at-home order in the COVID-19 pandemic and against the handling of the killing of George Floyd. Riots and protests over George Floyd took place in the city, centered on the square from May 28 into July, with early violent protests leading to damaged storefronts across downtown Columbus, with graffiti, trash, and looting around much of downtown.

All content from Kiddle encyclopedia articles (including the article images and facts) can be freely used under Attribution-ShareAlike license, unless stated otherwise. Cite this article:
Capitol Square Facts for Kids. Kiddle Encyclopedia.