The Capitol Theatre Building is a cinema and concert venue located at 140 E. 2nd St. in Flint, Michigan. It opened in 1928 and was listed among the National Register of Historic Places in Michigan in 1985. Designed by John Eberson, it is an atmospheric theater designed to look like a Roman garden. 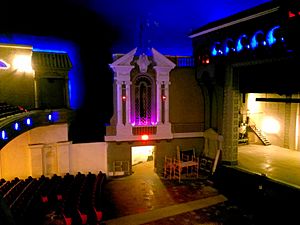 In 1923, the Flint Building Corporation purchased the lot on which the Capitol Theatre Building sits, for the purpose of constructing a combined theatre and commercial block. In 1924, Col. Walter S. Butterfield announced plans for the construction of a theatre. The Flint Building Corporation met with Butterfield, then reorganized as the Capitol Building Company, with Butterfield as president. Litigation delayed the start of construction, however, and it was not until 1927 that the project started. The building was designed by architect John Eberson, and constructed by Henry Vander Horst of Kalamazoo. The theatre opened in early 1928.

From the day it opened until it first closed in 1976, the Capitol was operated by W.S. Butterfield Theatres which operated several theaters in out state Michigan. In 1957, the theater was modernized in which the lobby and front was extensively remodeled and the atmospheric theater's original colors were painted over and many statues removed. After the theater first closed in 1976, the Barton 3-11 pipe organ was donated to the Flint Institute of Music and was moved to the MacArthur Recital Hall there where it still is today.

In 1977, local grocer George Farah bought the Capitol Theatre Building. Movies were shown and concerts held on and off at the theater until the heating boiler broke down beyond repair forcing the theater to be closed indefinitely in 1996. While the theater was dormant, it was kept in repair and two gas furnaces were installed in front of the stage to keep the atmospheric theater from freezing. The Farah family also started partial restoration work. But under private ownership, the Farah family could not raise enough money for a full restoration.

The restored theater, meeting modern building codes, seats 1,500 with the public areas looking similar to how the theater looked when it first opened in 1928. To aid in the restoration, a non-historic third story addition was torn down to restore balance to the theater's front facade. The 1940s marquee design was replicated utilizing all LED lighting and electronic attraction boards.

The theater reopened with a free event on Friday, December 8, 2017.

The Capitol Theatre Building is a two-and three-story building, housing both a theatre and commercial spaces. It is faced with buff brick accented with glazed terra cotta, with a diverse "fifteenth century Hispano-Italian style" architecture. The facade was originally symmetric, containing a three-story centrally located theater, flanked by two two-story storefront sections on each side. A third story was later added to one of the storefront sections which was removed during the theater building's restoration. The storefront sections have office windows above.

All content from Kiddle encyclopedia articles (including the article images and facts) can be freely used under Attribution-ShareAlike license, unless stated otherwise. Cite this article:
Capitol Theatre Building (Flint, Michigan) Facts for Kids. Kiddle Encyclopedia.