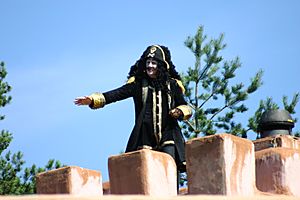 Captain Sabertooth, a fictional pirate from a series of popular Norwegian theatre plays for children

Captain Sabertooth (in Norwegian: Kaptein Sabeltann) is a long running series that centers around the eponymous pirate Captain Sabertooth, who was created and was originally portrayed by the Norwegian singer, composer, author and actor Terje Formoe. The series comprises several stage plays, theatrical films, a television series, cartoons, and books, all of which are aimed at small children.

The series was first launched as a series of stage plays. The first play, Captain Sabertooth and the Treasure in Luna Bay, was first performed in Kristiansand Zoo and Amusement Park in Norway where Formoe was Director of Entertainment. The play's success was so great that in 1994 it was followed up with another stage play, Captain Sabertooth and the Secret of Luna Bay, the music of which won Formoe a Spellemann prize, the Norwegian equivalent of the Grammy Awards. The plays have since been followed up with several theatrical films, which have proven to be very popular in Norway. 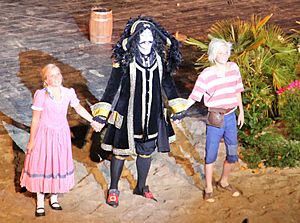 Captain Sabertooth is head of a band of pirates, who are sailing together in their ship called The Black Lady (Den Sorte Dame). Among the other pirates are Pirate Wally (Pelle Pirat) a fat and somewhat clumsy man, and Tiny (Pinky), a young guy fighting for recognition from the other pirates.

Other characters are Red Rudy (Røde Ruben), a former sailor who lives together with Aunt Bessie (Tante Bassa) in Luna Bay (Kjuttavika). He wants to be an honest and peaceful man, but is maniacally interested in gold and jewels, an interest he shares with the pirates. He and Bessie work in a tavern together with her niece Veronica (Sunniva). Veronica and Tiny become friends. 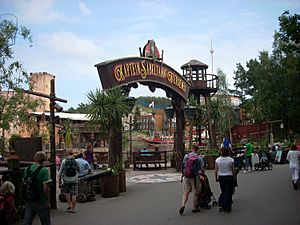 The gates to Captain Sabertooth's World

In 1995 a Captain Sabertooth themed section of the Kristiansand Zoo and Amusement Park was opened. The area has a pirate village theme and contains various attractions, restaurants, and shops that are centered around the character of Captain Sabertooth and the other characters in the series. In the summer the park holds several shows and features, including one that allows guests to ride on Sabertooth's ships The Black Lady and The Countess. 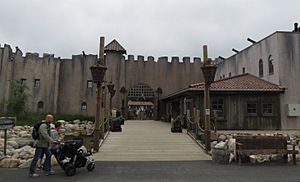 On the eastern side of the small lake by Captain Sabertooth's World is built a pirate village called Abra Havn. The pirate village consists of buildings that gives an illusion of a pirate society, surrounded by a high wall. During the high season apartments are rented out inside the pirate village.

All content from Kiddle encyclopedia articles (including the article images and facts) can be freely used under Attribution-ShareAlike license, unless stated otherwise. Cite this article:
Captain Sabertooth Facts for Kids. Kiddle Encyclopedia.