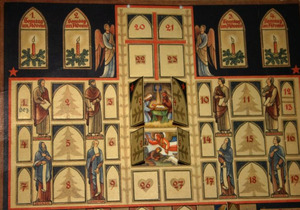 An Advent calendar with a nativity scene behind the 24th door.

An Advent calendar is a special calendar that counts the days to Christmas through the month of December. Most of them start on the first day of December, but sometimes they include the last few days of November because of the Christian advent. The advent calendar was used first by German Lutherans from 1800 to 1900, but now many Christians use them. 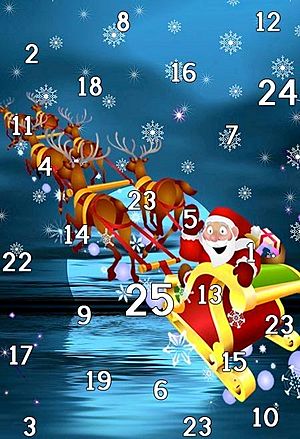 An Advent calendar with a picture of Santa riding his sleigh

Advent calendars have pictures on them that show either the Christian nativity scene, Santa Claus, or a winter landscape. However, there are also many different looks, such as sports or technology. They can either be made of paper, wood or fabric.

Many Advent calendars and large cards shaped like a rectangle, with little "windows" that can be opened. There are usually 24 windows on a card, one for each day from December 1 to the day before Christmas. Each window has a number, and you open one each day. For example, on December 16, you would open the window with a '16' on it. There are sometimes pictures, poems, or even chocolate behind each window. Other calendars have Bible verses or a prayer behind the windows, which Christians use to celebrate their Advent as part of their religion. Advent calendars can also have puzzles or games behind the windows.

All content from Kiddle encyclopedia articles (including the article images and facts) can be freely used under Attribution-ShareAlike license, unless stated otherwise. Cite this article:
Advent calendar Facts for Kids. Kiddle Encyclopedia.